what is poetry? what is life?

It takes me back to when Fifty Shades took off, women everywhere running to the bookstore to get a taste of this slight erotica phenomenon. I had read it, and truthfully, cringed my way through it. I was 18, not quite sexually experienced and not particularly inclined to be. Yet the whole idea seemed a bit far fetched for me. I ended up finishing the series because I genuinely fell for the love story (ha, classic). But I talked to one of my male friends and he was strongly opinionated about the matter – “the author was not a real writer – she just got a pen and a book and wrote her fantasy.”

What constitutes that as NOT being a writer? Sure, many people alike didn’t enjoy her style of writing or the topics she was writing about – but isn’t a large basis of novel writing, experience and fantasy, blended perfectly together to make a whole different world?

I mean, what would I know? He’s studying something practical now and I’m forging my path to be a writer.

Needless to say, we didn’t have that much in common and said friendship did not stand the test of time. (Or the test of fuckboyery).

I feel it’s the same for Rupi Kaur. We’ll put aside the allegations of copyright, as that has not been proven and is a matter in its own right.

I was very inclined to buy her book because I had always enjoyed her quotes on Instagram. I had picked it up, stared at it for about two minutes straight, and put it back on the shelf. Then I sat down on the floor, opened it up, and read.

I had always particularly liked her quote on selfish people. It just struck a cord…or twenty. 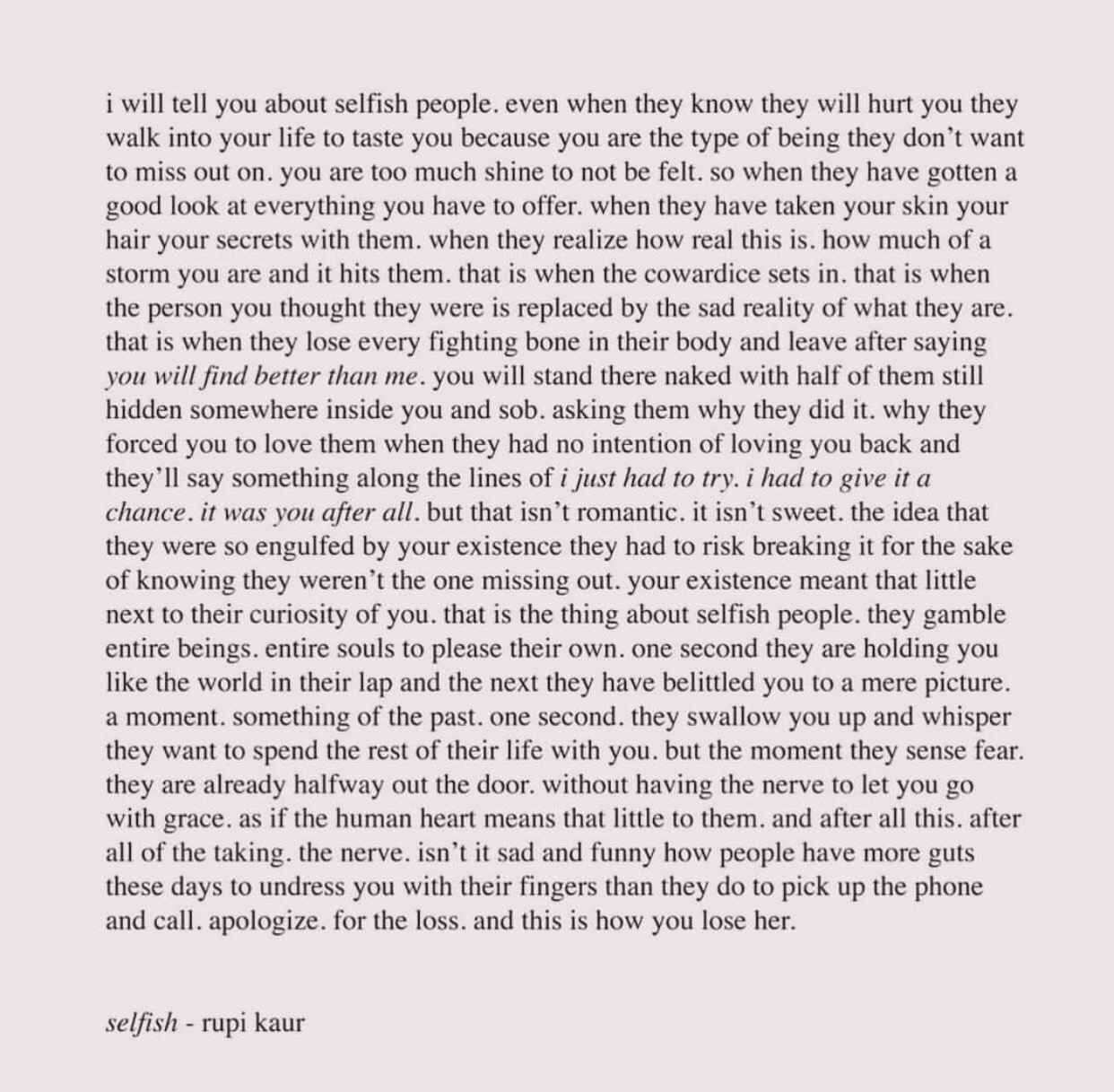 Maybe two or three more poems stuck out to me throughout the entire book.
Not enough so to remember them now.

So I will admit that I was glad I didn’t spend the $15 or so just for a pretty book. But I will also admit that I have posted her quotes on Instagram. I am not here to be all high and mighty and say ‘her writing is shit.’ Because I don’t think that at all. I just think we all have different opinions of what is a good piece of poetry/writing.

On the one hand, a lot of her poems do nothing for me. On the other, they seem to have had an incredible effect on thousands of women.

A poem is defined as a piece of writing in which the expression of feelings and ideas is given intensity by particular attention to diction (sometimes involving rhyme), rhythm, and imagery.

I oftentimes read peoples comments on social media (need to stop fucking doing that) and notice that they are picking at her style of writing because it’s not what poetry is in their experience. If they saw a few long words, strung together in some sort of rhyme, void of any real meaning; they would probably accept that as poetry. Because it rhymes.

Some people just need the words in front of them to make them feel as if they are not alone. The people who have made Rupi an incredibly successful writer, are the ones who are typically unable to articulate their thoughts and find relief when they scroll past her instagram photos on a Wednesday afternoon after a shitty day at work. Ah. I feel that shit in my soul.

I’m the same, but I find my solace in novels. Immersing myself in a completely different world, following every problem and solution. In her own special way, she’s allowing the reader to fill in the blanks.
I think a large part of her success comes from where she has come from, the adversity she has faced and she has still risen above it all. (Am I allowed to say that?)

Let her write
Her poems
Let women enjoy
Her poems

And stop
Putting out
So much hate

But most of all…how the fuck do you say her last name?